With the election of a Liberal government on Monday, it looks like we may finally get electoral reform in Canada. Some pundits don’t think that a majority government will do it, but I believe that there is enough evidence that strategic voting got the Liberals their majority that they may actually follow through, knowing that they will lose those votes by the next election if they don’t do something.

My top priority for voting reform if of course the ranked or preferential ballot. My second priority, something I haven’t discussed before, is the removal of party names from the ballot. It seems like a small change, but I think it is vital.

There is a law in Canada that party advertising is not allowed in a polling place. The idea is that it may affect the outcome of the vote as people may be more inclined to vote for a candidate after seeing an ad for that candidate. Makes sense to me, keep the playing field level.

But then, once you get to the ballot, the name of the political party appears next to each of the candidates. It can be argued that this takes away the “level playing field” between candidates, making what is supposed to be a local decision into one based on national party. And that is really the crux of this. In our system, you vote for the local candidate, not the national leader.

The idea of voting for a local candidate is so that that person, who has a personal knowledge of the riding, can make decisions based on the wishes of the electorates in that riding. A party only gains power in our system when enough of those local representatives give it the confidence of the House. Many of the problems we have had of late have been because the national party dictates to the local member instead of the other way around.

If you remove party names from ballots, what you do is make it more important for the local candidate to become known. A candidate like Brandon-Souris’ Larry Maguire would have done just fine on Monday because he ran a locally focused campaign based on his own personality and with a catchy local slogan, “Rehire Maguire.” 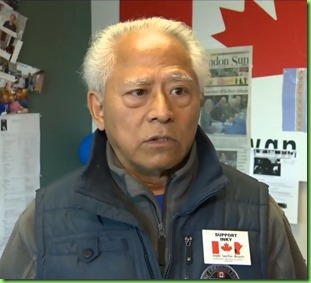 If you look north, to Dauphin-Swan River-Neepawa, there may be an example of a riding that may have had different results had party name not been on the ballot. In that riding, you had Inky Mark, former Conservative MP, running as an independent along with the other regular party representatives. As it stands, Mr. Mark only got 8.1% of the vote on Monday night, versus over 40% for his Conservative opponent. I have no way of proving it, but I suspect that had there been no party affiliation listed on the ballot, Mr. Mark’s numbers would have been higher, and Mr. Sopuck’s (Conservative) would have been lower. Both men are known to stand for small “c” conservative values, and both have won the old riding of Dauphin-Swan River-Marquette with over 18,000 votes.

Perhaps I am wrong, but if I am then removing the party name will have no affect on the outcome of an election, no harm, no foul. If I am right, then party name on a ballot is affecting the outcome, essentially acting as advertising inside a polling place.

Some would argue that removing party affiliation from a ballot would impede the ability of some people to vote. If, after 36 to 78 days of a campaign, if you are not informed enough by that point to be able to identify your local candidate’s name that will best represent you, then perhaps you are not informed enough to vote. The only reason to have a party name on a ballot is to help “direct” you to which candidate that you should vote for. It amounts to an advertisement for the party, something Elections Canada should not be helping parties do.

Advertising inside a polling place is illegal for a reason.