Pennies and Nickels, 6¢ too much It always amazes me how uncommon “common sense” seems to be. Case in point, the elimination of the penny. After years of NDP MP Pat Martin pushing to get the penny eliminated, the Tory government of finance minister Jim Flaherty finally axed the coin early last year after being announced in the previous year’s budget.

Some people do not agree that the penny should have been eliminated, and someone took to stating that displeasure about Jim Flaherty’s involvement in the whole matter after the announcement of his retirement from politics. From Sound Off in the March 26th edition of the Brandon Sun,

“I will always be able to relate that Flaherty was the minister who, along with MP Pat Martin (NDP), took it upon themselves to eliminate part of the Canadian coinage system that was the foundation and building mainstay of money counting and saving. They called the one cent useless and excised its existence. There were other options that needed weeding, but no, the one-cent piece became their victim and was sacrificed on the stained altar of common sense.”

I’m really not sure what the writer was talking about. The one cent piece was useless to buy anything. We have now eliminated it, and as someone who works in a retail store, we don’t miss it one bit. In fact, everybody adjusted to the new reality in less than a week, and other than a few people thinking that pennies were illegal to use, there was no hiccups that I can remember. Pennies will remain legal tender for the foreseeable future, but no one uses them much anymore after only a year. As for being the foundation of our monetary system, I suppose there is an argument for that, but we once had half-cent coins before Confederation, and getting rid of that foundation didn’t hurt us.

I personally think that we didn’t go far enough. We should get rid of the nickel too. The CBC reported last year that according to Jean-Pierre Aubry of the Desjardin Group we should soon be getting rid of the 5 cent piece. He says, and I agree, that the nickel is approaching the point that the penny was at in 1982, the year that he says we should have gotten rid of the penny.

We really need to look at what these coins are costing us and if they have a use anymore. It is not sensible, despite so-called common sense, to keep using a coin that costs us more to make and handle than it is worth.

To me, the dime should really be the lowest denomination in our monetary system. Despite what the Sound Off writer says, it is the dollar that is the basis of our money, and the coinage smaller than it are only there to break it into parts; in 2014, 10 parts is enough.

Without a nickel of course, we can no longer have quarters, so those would go too. My assumption is that we would have a 10¢, 20¢, and 50¢ coin along with the loonie and toonie. At that point we could get rid of the rounding up or down system we have now for cash transactions and go to only the one decimal place for cash and electronic transactions. We did okay rounding away the 3rd decimal place for a century, I’m sure we could do the same thing one decimal place over.

Since our coinage would have to be retooled, we need to look at this now. Getting rid of the penny was simple, but getting rid of the nickel will take more than just stopping circulation. We had the ability to leave the penny until long after it was useful because its removal was so easy. The nickel we’ll actually need a plan. We should probably ramp up 50¢ piece production and put a 20¢ piece into circulation fairly soon, so that we can slowly reduce quarters and nickels until that day when we get rid of them altogether. And if we’re going to introduce new coins, we should do it now while cash registers still have that extra spot left over from the penny. This one shouldn’t wait another 30 years to happen. 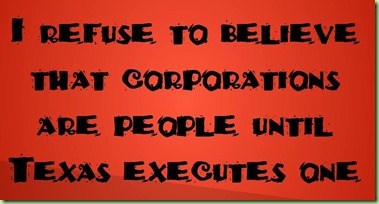 Today in the United States, the Supreme Court heard arguments involving a chain store called Hobby Lobby and its claim that its religious rights were being trampled on by the requirement in The Affordable Care Act, Obamacare, that Hobby Lobby needs to offer health insurance that covers contraception to its employees, if it decides to offer health care at all. It doesn’t have to provide contraception to its employees, just offer a health insurance plan that covers it.

Hobby Lobby claims that that requirement goes against its religious rights because its owners believe that some forms of contraception are actually similar to abortion, which is against their religious beliefs.

So, now everyone seems to think that the decision is whether or not a company can have a religious belief and get an exemption to a law based on that belief. I have seen many people pointing out that such an exemption in this case would lead to exemptions in other cases. Maybe someone doesn’t believe in speed limits; should they get to travel as fast as they want on the roads? People and corporations would start saying that firing LGBTQ employees was okay because their religious beliefs made it so. Those are all very good and valid reasons for the SCOTUS to rule against Hobby Lobby… but it is all missing the point.

The part that never seems to get brought up is the employee’s religious rights. Seriously, if Hobby Lobby can claim its religious freedom is being infringed, what about the employee? This is the damn problem with our society these days. Why is all the focus on the company? The employee is a person and unlike the company, the employee was the one that the Constitution and the Bill of Rights was referring to when it was written over a couple centuries ago.

For me it comes down to this, the law must protect the person who is in the less powerful role. The employer, whether a corporation or an individual, is in a position of power over the employee in many ways; dictating their religious choices should not be one. Hobby Lobby has decided to offer health plans to their employees, something that they do not have to do, but which they do for the tax break it gives them. If it hurts their religious morals so much, then they could forego the tax break, but they want the money more than they want to follow their so-called conscience. When they made that decision, that was the end of their choice. At that point the employee’s religious freedom kicks in, part of which is being able to not be bound to your employer’s religious beliefs.

If you think that you get to impose your religious beliefs on other people, then religious freedom is not exactly the concept that you think it is. 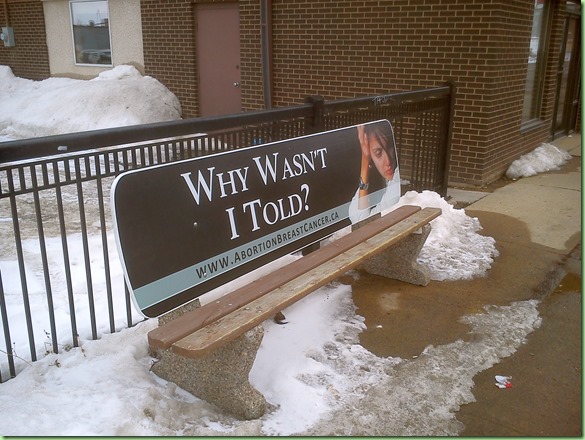 See that bus bench? I did, last night, on Princess Avenue next to the old fire hall. When I saw it, I just shook my head and rolled my eyes.

Of course if you go to the site, it claims that induced abortions have been shown to increase breast cancer risk. Never mind that their is no causal link found despite the site’s claim otherwise; perhaps that’s why they claim that more research needs to be done. The website is a coalition of various “Right to Life” groups from across Canada.

Nothing like threatening women with breast cancer to stop them from doing something you don’t like though. Class act!

So if you pass by this billboard, and check out the site it lists… remember it is FUD. There is no science here.

Is there a plan?

The Daly Overpass isn’t getting overhauled this year, or next year most likely. The province announced on Thursday that the First Street Bridge is in dire shape and work on it will need to be completed before any work on the Daly over on Eighteenth Street gets looked at.

In Saturday’s Brandon Sun (March 15, 2014) the editorial questioning who knew what about the bridge, and when, is a good read. Whether or not there was some political gamesmanship is not the main point of this post, however the question does come to mind.

To me, it appears that the province is buying time on Daly because they are having a hard time getting a plan together. First clue? They still say the bridge needs widening. My feeling is that the people saying that have not actually looked at the bridge. So, let’s take a look. 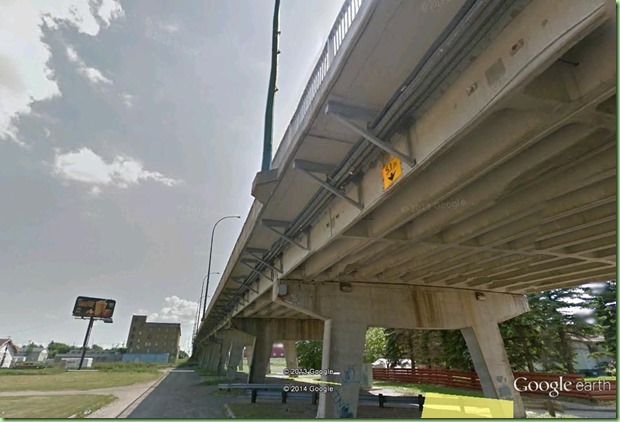 Through the magic of what is Google Street View we can all look at the underside of said bridge. This picture is from Stickney Avenue looking south towards the “duck plant” building at the corner of Pacific and 18th. That my friends is a bridge that has already been widened. See those steel supports all the way along the left side? Those are holding up the sidewalk that is hanging off the eastern side of the bridge separated from the roadway by Jersey Barriers. That sidewalk is beyond the concrete supports that actually hold up the bridge. I’m no structural engineer, but my guess would be that those supports are at or near their design capacity while still supporting traffic.

My guess is that the province needs time to get a plan in order. A plan that requires expropriating land and demolishing a very large building. I cannot see how they avoid building another bridge beside the existing structure. To do that, they have to knock down the “duck plant” building and force the homeowners at Stickney Ave to move out. This is not going to be an easy task. Eighteenth Street northbound will have to be curved slightly east to meet a new bridge which means cutting through the mini mall parking lot at the corner of Pacific and 18th.

I frankly hope that I am wrong, but to the layperson widening this bridge does not seem possible; twinning will have to happen. I’d love to see someone investigate this further.

In the meantime, with no action on the Daly Overpass anytime soon, perhaps the city should apply for federal funding to help connect Hilton Avenue to 26th Street and send some traffic west, as mentioned in a previous post, “Is the Daly Overpass the Problem?” 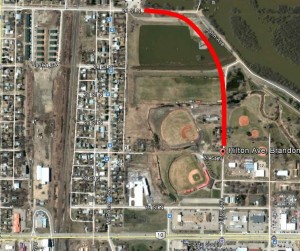