Target Corporation of Minneapolis, Minnesota announced what many suspected yesterday, but was still surprising; they would be closing their Canadian operation after less than two years in business. About 17,000 associates at 133 stores and 3 distribution centres would be losing their jobs. The term “epic fail” will refer to Target Canada for the foreseeable future.

The store here in Brandon at the Shopper’s Mall demonstrates the differences well, as it has existed as all three retailers, as well as Woolco since it first opened in the early 1970s.

When Target first announced it was entering Canada, it did so with the purchase of the leases of most of the existing stores of Zeller’s from the Hudson’s Bay Company. Target made a point of just buying the leases, pointing out it had no interest in the stores, or in the current staff. Any Zeller’s staff would have to apply for jobs with the new company. Part two of the plan was to renovate all of the stores at an average cost of $10,000,000 per store.

In 1994 Walmart announced that it was entering the Canadian market, it did so with the announcement that it was buying the discount chain Woolco, not just the leases, but retaining most of the company assets including employees and other infrastructure across the country. They modestly renovated the Woolco locations while remaining open, the biggest changes being replacing the cafeterias with McDonald’s locations. Walmart went on to become the dominant retailer in Canada.

What was the difference?

Walmart came into this country knowing that they were in foreign territory and that they would need Canadian expertise to help them succeed in the new environment. They didn’t come in and promise to open 133 Supercentres on day one, but instead integrated an existing trusted Canadian retailer into their corporate culture and ways of doing things. In the first year you would see Walmart associates with nametags that said “20 Years of Service”. Walmart recognized the importance of having a Canadian perspective right out of the gate. They also realized that Canadians would not expect a replica of American Supercentres, but would understand that Walmart would slowly but surely transition Woolco to a better retailer. They under-promised, knowing that the benefit would come later when they over-delivered.

Target should have known better. If you are the number two retailer in your home country, and you decide to enter a market that your number one at home is already in, you should probably follow their lead and copy their successes.  Target did not, but instead did everything the opposite that Walmart had years earlier.

Many have opined that Target made the mistake of buying the Zeller’s chain, with its run down image and locations. My take is the exact opposite. Target’s problem is that they didn’t buy the chain, but instead opted for its leases only. Had Target entered Canada the way of Walmart, then they would have bought the entire chain; stores, delivery centre, logistics, and yes, the staff. Had they kept Zeller’s intact, then they would have started out from a point of lowered expectations from which they could slowly transform into the Target they wanted to become. People would have seen the incremental changes, thought that they had improved upon Zeller’s, and would not have expected the American Target experience on day one. The other benefit, a fully operational distribution and logistics network. Absorbing Zeller’s would have prevented the problems that eventually ruined their reputation.

Perhaps the biggest expense that Target encountered in the Canadian rollout was the renovation of all of the previous Zeller’s stores. Now, there is no doubt that many stores needed a renovation, however, many did not. A good example of this were stores in Winnipeg and Brandon that had been renovated a short time before. 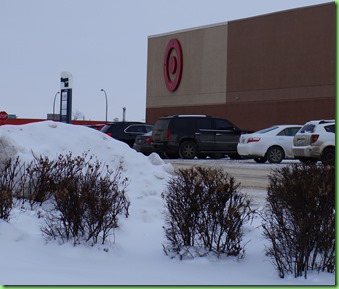 The Zeller’s store at Shoppers Mall in Brandon had opened in May of 2006 and closed in November of 2012 after only 6½ years of existence. The store had been fully renovated on the interior during the early winter months of 2006 to look a lot like a Target store. In 2013 Target completely gutted the store to the point that all that remained was the roof and pillars. After that they completely rebuilt it; it essentially looked the same as before, but without a restaurant. At an average cost of $10 Million per store, it was a colossal waste of money during which the store was closed and not bringing in a dime.

And the roof still leaked.

Another thing they would have known had they kept the Zeller’s team would have been the attitude of the Canadian shopper. The Canadian shopper is less about flashy and aspirational purchases which Target targets in its American stores, and is more about value for money. Another difference with the Canadian customer is that they do not tell you when you have disappointed them or made them mad. I have seen research in the past that said while an American customer will pester or even yell at a retailer, later buying if acknowledged, the Canadian consumer is more apt to stay quiet and just leave disappointed, never to return. Canadian consumers will also let all their friends know about the bad experience. Fail one of us, word gets around.

Target wasn’t prepared to enter Canada and they did not know it because they didn’t do their research. Walmart knew enough to know that they didn’t know the country and were willing to take it slow while getting to know us. While Walmart collects the fruits of its slow and steady remodelling of Woolco, Target leaves 133 empty stores where similar looking Zeller’s stores once stood. What would be really ironic would be Hudson’s Bay taking over the spaces with a revived Zeller’s brand, over 100 essentially new stores in your existing colours that you didn’t have to pay for building would be the retail industry’s coup of the century.