Reduced speed limits in school zones came into effect this past September across Manitoba. The provincial government had earlier passed a law enabling local governments to reduce speed limits next to schools if deemed necessary. Of course, not wanting to look like they didn’t care about the children, many local councils including the one in Brandon p 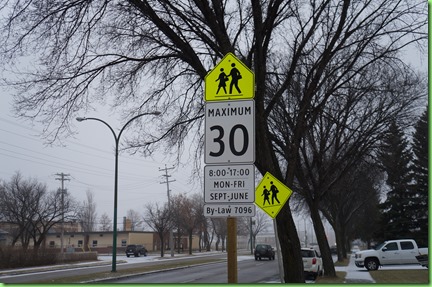 assed such a bylaw.

The signs went up in August.

So, of course,  the debate started on eBrandon.ca and twitter the first week of school. Predictably there are a number of people who think that the whole thing is just a money grab with increased speeding tickets, with others arguing that we should do anything we can to keep the children safe. To be frank, I think the truth is somewhere in the middle, but I question if it was really a safety issue.

So, let’s actually do something that makes children safer. I’m not convinced that this is it. I think a better idea is higher fines in school zones for speeding, as does former Brandon city councillor Stephen Montague, as pointed out in this June 6, 2014 editorial in the Brandon Sun.

“While signage is a minor concern, we think Coun. Stephen Montague (Richmond) wasn’t wrong when he suggested there could have been other options to lowering the speed limit, like keeping the limit the same but increasing fines for speeding in school areas.

He also said better enforcement of no-parking and no-stopping zones near schools where stopped vehicles narrow the path for passing cars and limit lines of sight could also provide a benefit.”

This becomes really apparent on 26th Street in front of J.R. Reid School. As you approach the school from the south you cross Park Avenue which is a lighted intersection, and immediately enter the school speed zone. It seems possible to me that at some point as drivers slow down through the intersection that someone is going to get rear-ended by someone else more worried about the lights and less about the zone. I could very well see the accident numbers going up at this intersection as a result of this speed change.

I’m also not convinced that the speed limit had to be reduced. Again, at J.R. Reid it never appeared that people going the previously posted speed limit of 50km/h were ever a problem. I’m sure that there were problems with speed, but I’m guessing that the problem was most likely people going 60km/h or more in that zone. Yes, technically the drop to 30km/h makes the spot even safer, but I sense that it is already pretty safe. Again, the Brandon Sun looked into this city wide, and from that same editorial:

“But there don’t seem to be any major injuries or deaths in Brandon school zones in nearly a quarter-century.

As we reported yesterday following a search of the Brandon Sun archives, two children were killed by vehicles in recent years, but neither incident was outside a school.

The closest fatality to a school that could be found was in March 1991, when a five-year-old boy was hit on Knowlton Drive — on a Sunday —after walking into traffic from between parked cars, in front of the Sportsplex near Kirkcaldy Heights School.”

It seems to me that we are dropping the speed limit to prevent accidents that are not happening, and I would expect that we will see an increase in rear-end collisions as a result. It would not surprise me in the slightest if this costs Manitoba Public Insurance more money in the long run. Those of us who obey the posted speed limit were never the problem, in fact it seems that there wasn’t actually much of a problem. If in there was a problem, then Victoria Avenue and 18th Street would have a 30km/h speed limit next to Earl Oxford School as one would suspect that to be the most dangerous school zone in the city, yet we do not reduce the speed limit in that area. That tells me that the other zones are not about safety but about the appearance of safety. “Safety theatre” I would call it.

We already have double fines for speeding in a construction zone, we could do the same or higher in a school zone. Signage in a school zone could read, “School Zone: Speed Fines X 4”. That would hit the problem drivers where it hurts, the pocketbook, and leave us other drivers to drive at a reasonable limit. It would also mean that Earl Oxford would have a safer zone as more people would observe the 50km/h speed limit.

The provincial government needs to revisit this law and provide for these higher fines in school zones. Local governments could then have the choice of reducing the speed (if it makes sense), or of multiplying the fines. Choose one or the other, but not both, depending on the school. Schools on residential streets actually make sense at 30km/h, like Meadows or Green Acres for example. However, schools like J.R. Reid, Earl Oxford, and King George, which are next to major routes, do not make sense to have a reduced speed limit; we should find a better solution.