Future of the Senate

Tom Mulcair is right. The Senate of Canada most likely needs to be eliminated. In Canada, in 2015, it does not make sense to have an appointed body passing or blocking legislation. This Canadian equivalent to the the elitist House of Lords in Great Britain smacks of a bygone era.

Unfortunately, it doesn’t look like we’ll be getting rid of it anytime soon. The Supreme Court ruled last year that without provincial approval, the federal government cannot alter the Canadian Parliament, which includes the Senate, in any substantial way.

That requires opening the Constitution.

Last year I proposed a way that the Prime Minister could push through Senate Reform, basically by bribing the provincial premiers into it by passing the power to appoint Senators to them. It is elegant in a few ways, it gives the provinces more power (which is irresistible), it most likely means elected Senators because premiers would not want to be seen as undemocratic, it removes power from his successors (something Chretien seemed to revel in), and it takes any Senate situations such as the current expense scandal far far away from the Prime Minister.

I still think that this is the most likely way that we would see senate reform; passing the responsibility to the provinces. What Quebec or Ontario premier is going to pass up on the ability to at least have some influence on who represents their province?

That all being said, I would like to see a referendum this fall, just as a number of NDP and Conservative MPs have suggested, that asks the Canadian public directly if they feel that the Senate is still needed in a modern Canada. If the vote was overwhelmingly against keeping the Senate, and I suspect it would be, then the provinces may have no choice but to allow the elimination of the Upper House.

To me, the question seems simple. “Notwithstanding the constitutional amendments required to abolish it, do you feel that the Senate of Canada should continue to exist?”  The reason for the first part of the question would be to eliminate those who would vote to keep the senate because they felt the constitution wouldn’t allow it or that opening it up might prove difficult. The question is about whether or not you want the Upper House to stay, not whether or not you think abolishing it is impossible. Before moving ahead, we need to ask this basic question.

We need to know Canada’s answer.

The main recommendations from Canada’s Truth and Reconciliation Commission came out today. In it were 94 recommendations (pdf) for the various governments of the country to follow.

Skimming through the recommendations, it became apparent to me that many of the sections came under headings that in the Canadian constitution come under provincial jurisdiction, but because of the Indian Act are the responsibility of the federal government when it comes to our country’s First People.

This brings me back to something that I have been saying for years now. If the federal and provincial governments really truly want to meet First Nations people as an equal partner, then First Nations need to be recognized as a “province” by those same governments. I also find it telling that when I look at the map, the three jurisdictions with a higher overall Aboriginal population are also the three that we do not give full provincial powers to, namely the Yukon, Nunavut, and North-West Territories.

One of our early steps as a nation towards reconciliation should be to acknowledge these regions deserve and are owed a full seat at the table. As such, I would propose that we should move toward making the three northern territories into full fledged provinces, as well as the First Nations of the south comprising a 14th “virtual province” which would be true self government and would replace the out-dated, and frankly racist, Indian Act. It seems to me that only then, when the Aboriginal people have their own real self-government, can this country move forward. 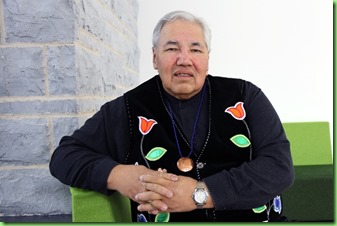 Another thing that occurred to me while watching today’s proceedings, was how many of the recommendations in this report can improve Canadian lives in general, and not just those of Aboriginals.

One case in point, the recommendation that denominational schools be required to not only teach the dogma of their religion, but also would have to teach a course on other religious practices including that of Native Spirituality. I’m assuming that such a course would require teaching of all of the major religious practices in Canada, perhaps meaning a better understanding between these groups.

Another case mentioned by Justice Sinclair  was the importance of media sources, and in general the CBC. With the cutbacks, many northern Canadians are losing access to the CBC unless they have cable or satellite. Often it was their only source of media information. But it is not only the north, it is also other areas of rural Canada also. The city of Brandon is on that list, we no longer have a CBC or SRC broadcast tower in the region since the loss of CKX on channel 5 a number of years ago. That again, not only affected Brandon, but communities such as our neighbour Sioux Valley who no longer have a reliable CBC signal either. This is a  cultural link we need repaired, for rural Canadians coast to coast, native and non-native alike. It reflects who we are as a people, as Canadians, in a way that the commercial broadcasters cannot.

The promise of Canada is of a country where people from everywhere and of every cultural background can live together in peace and prosperity, a promise that is not realized if we cannot even achieve that dream for our earliest inhabitants.